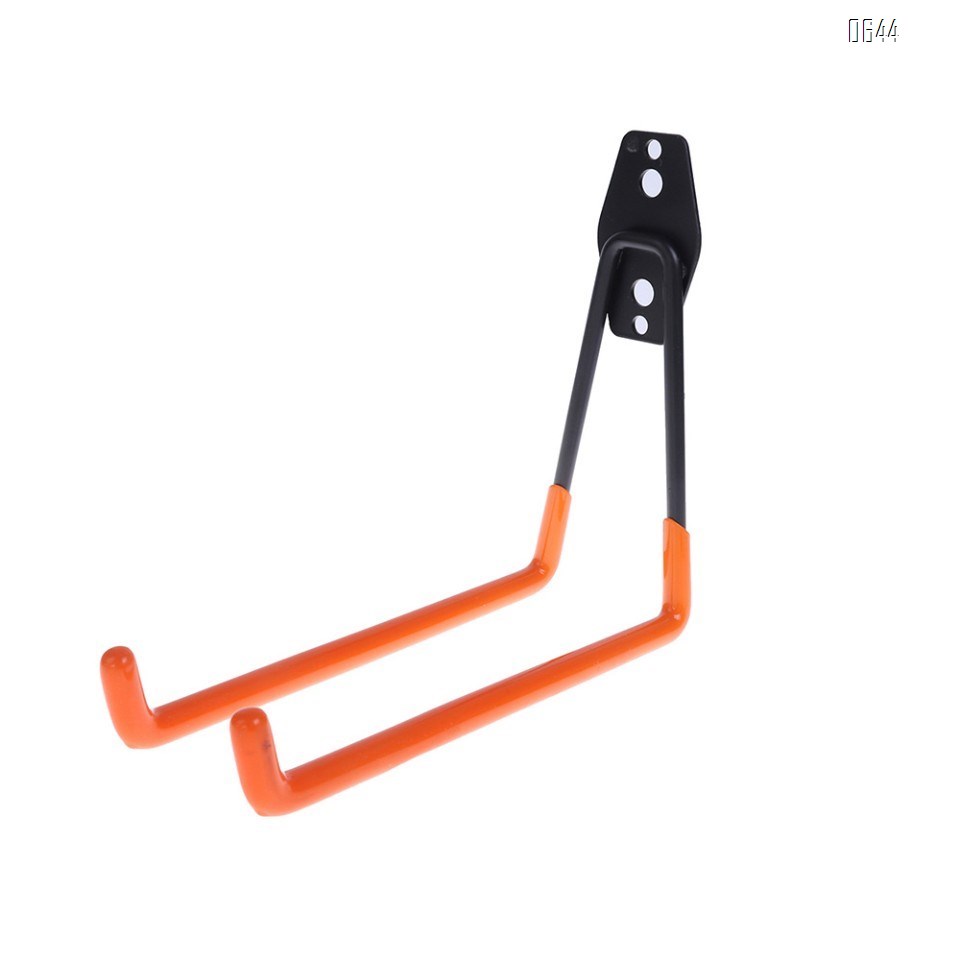 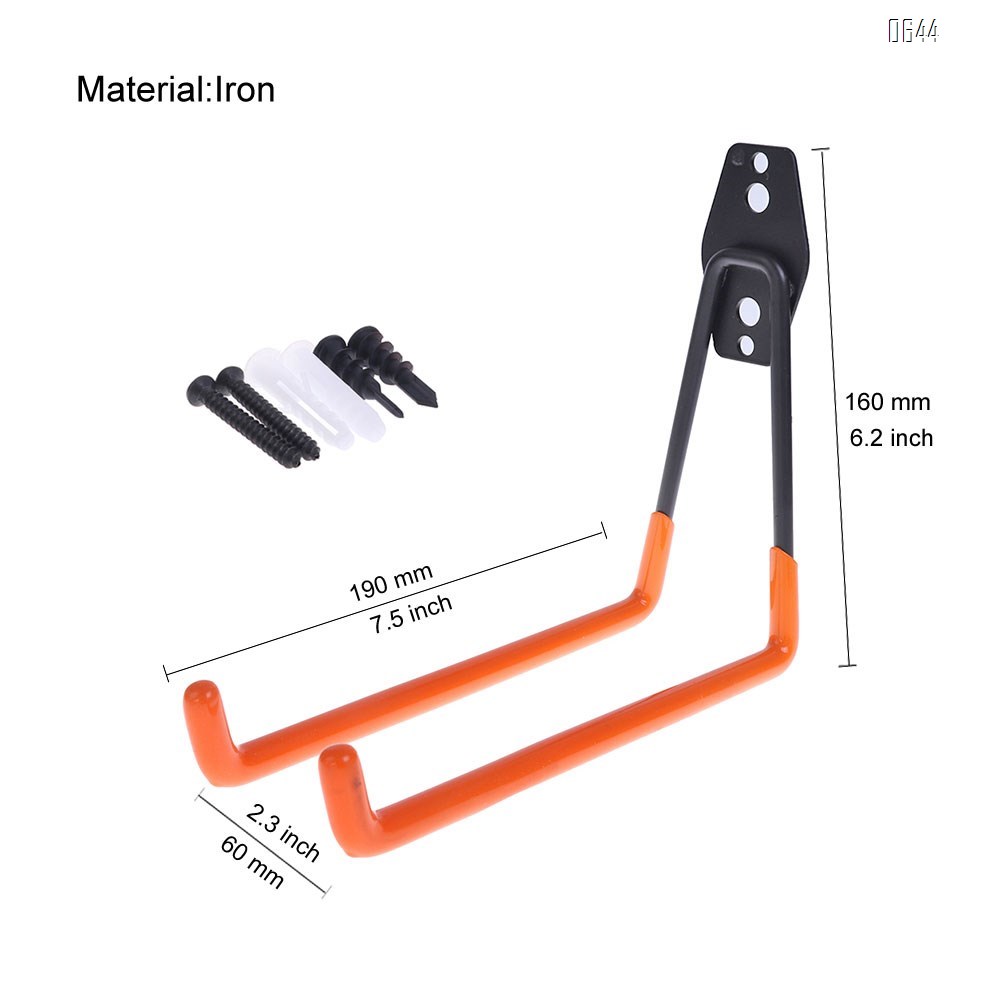 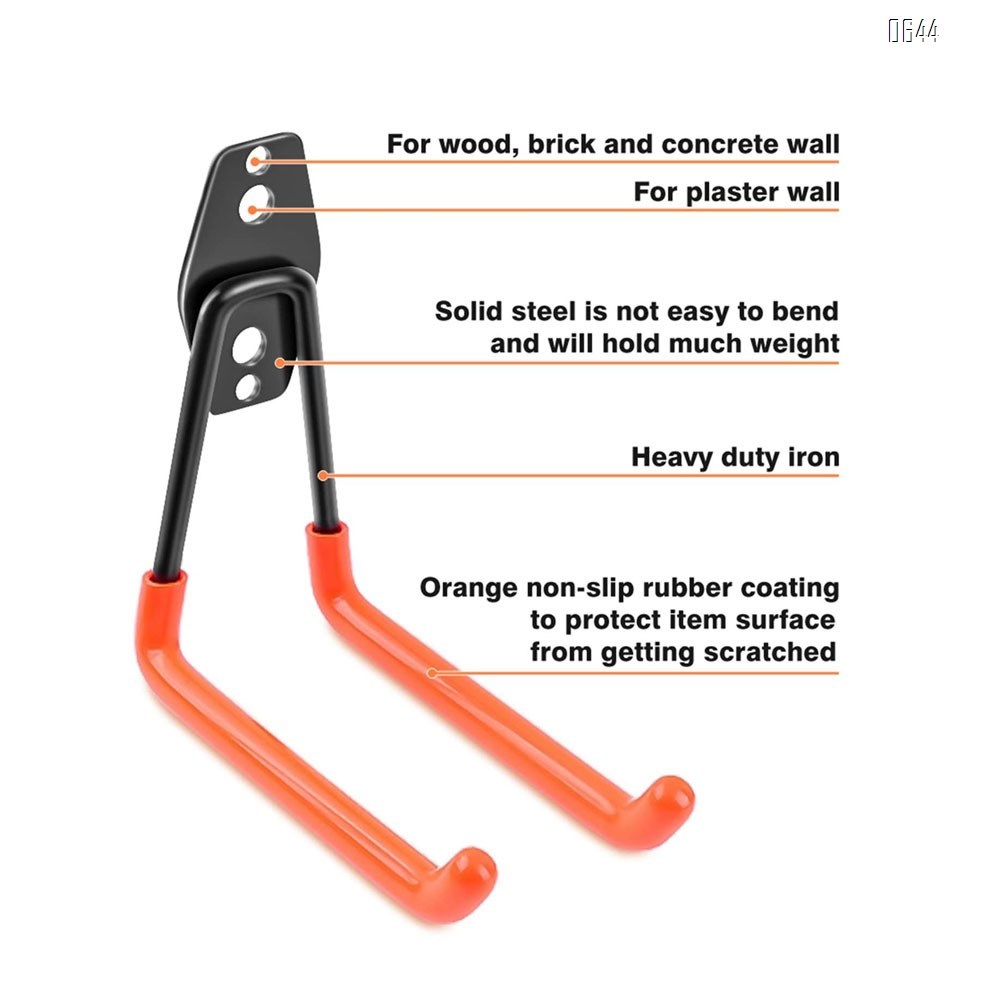 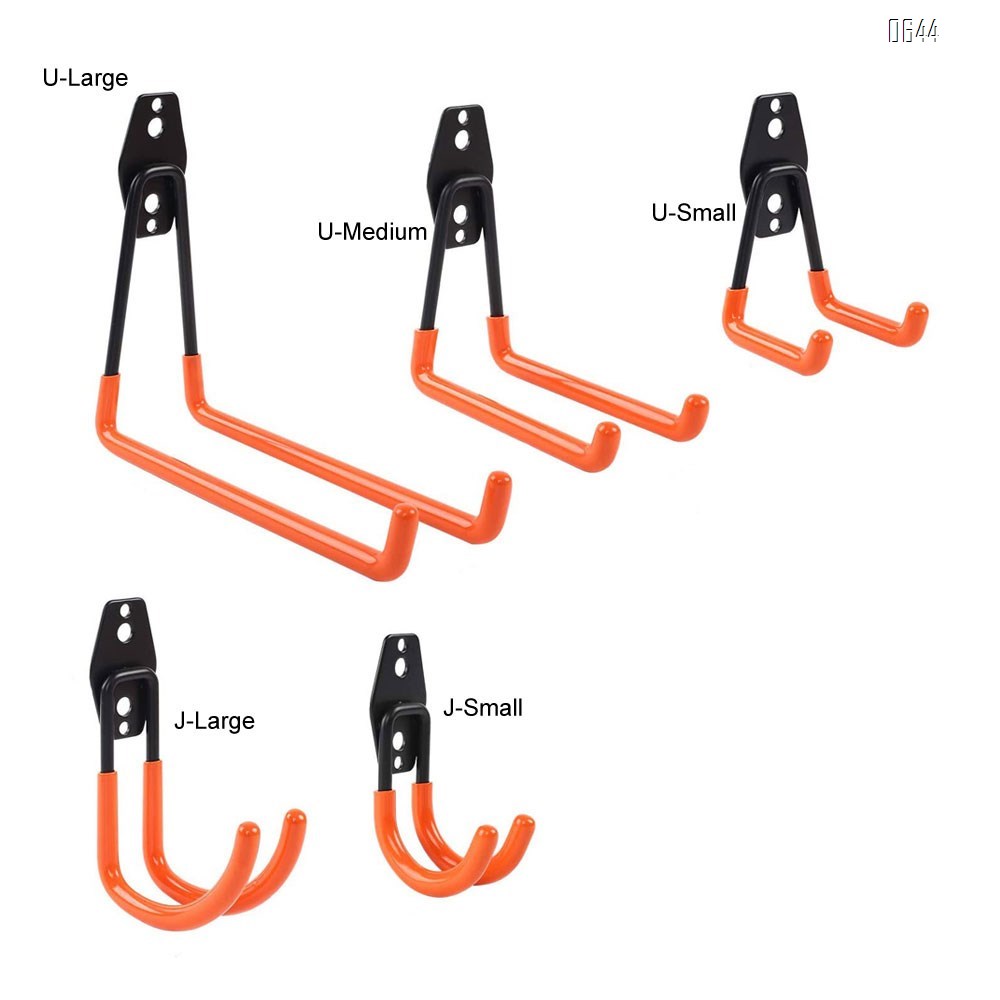 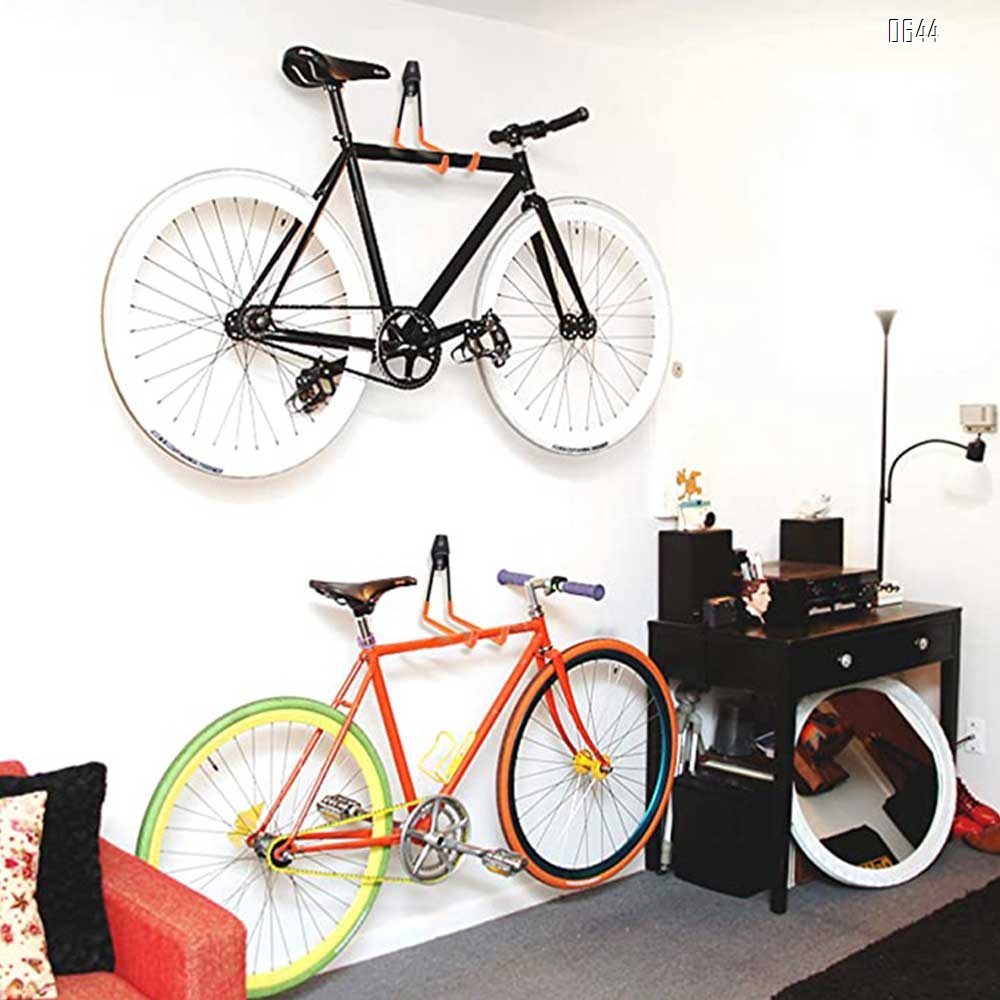 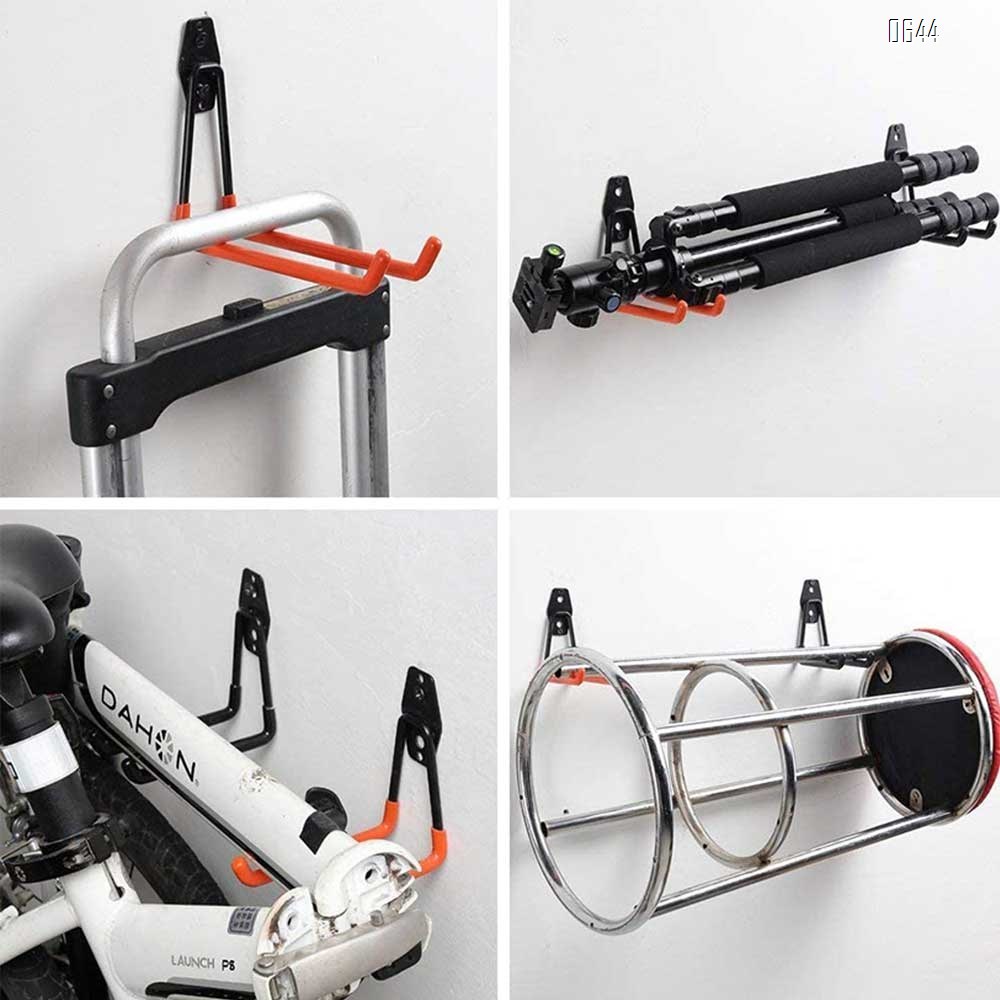 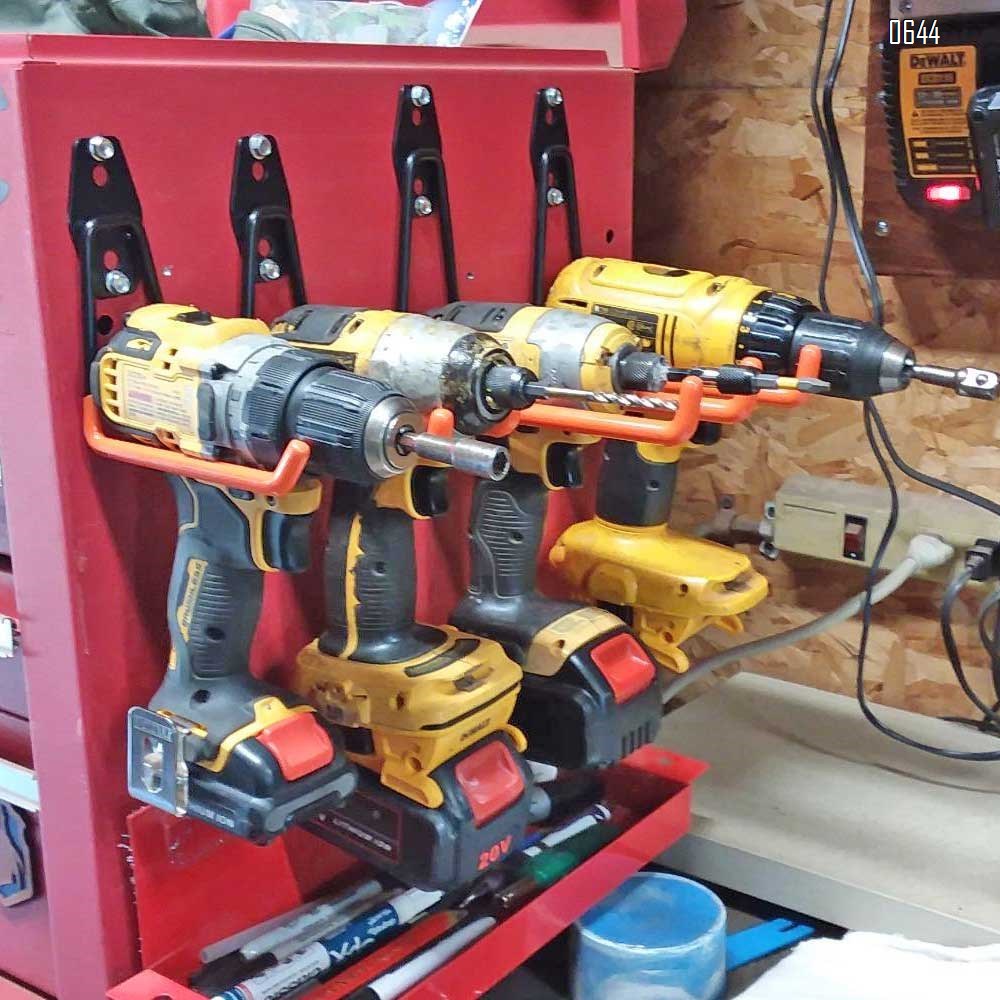 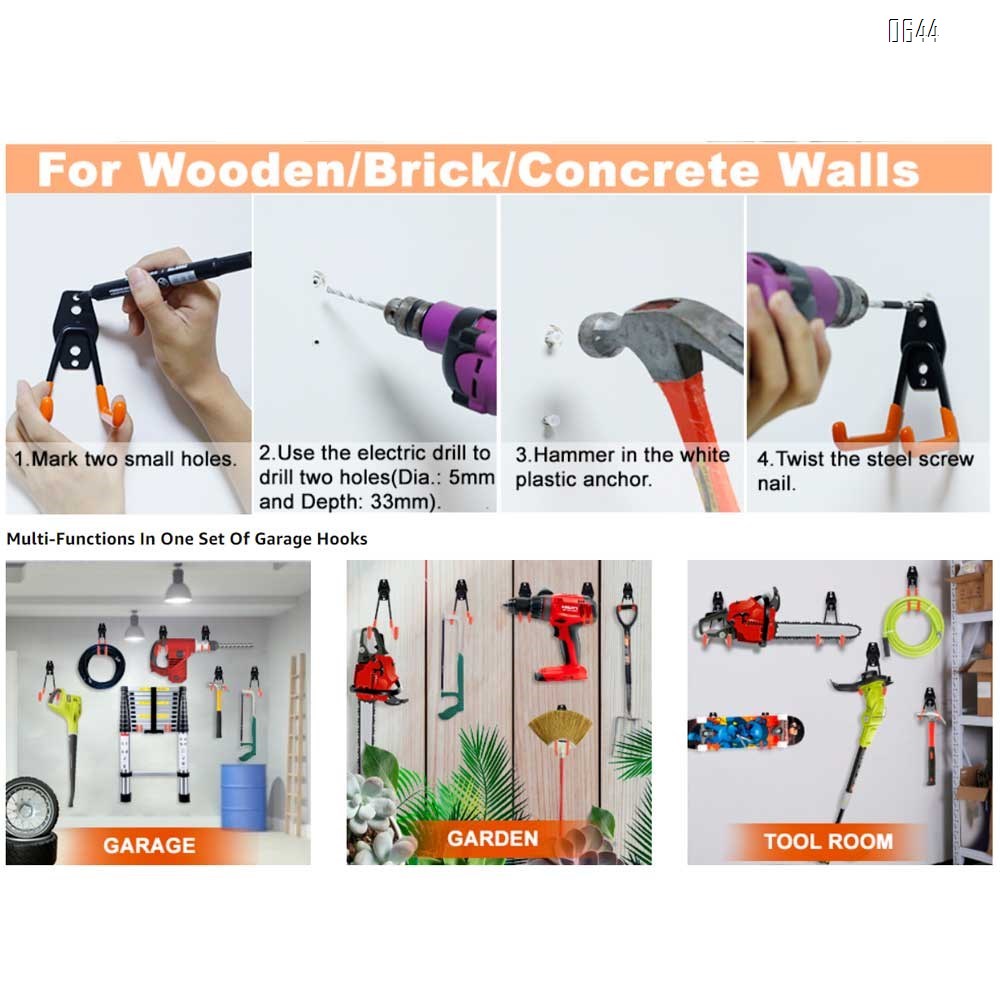 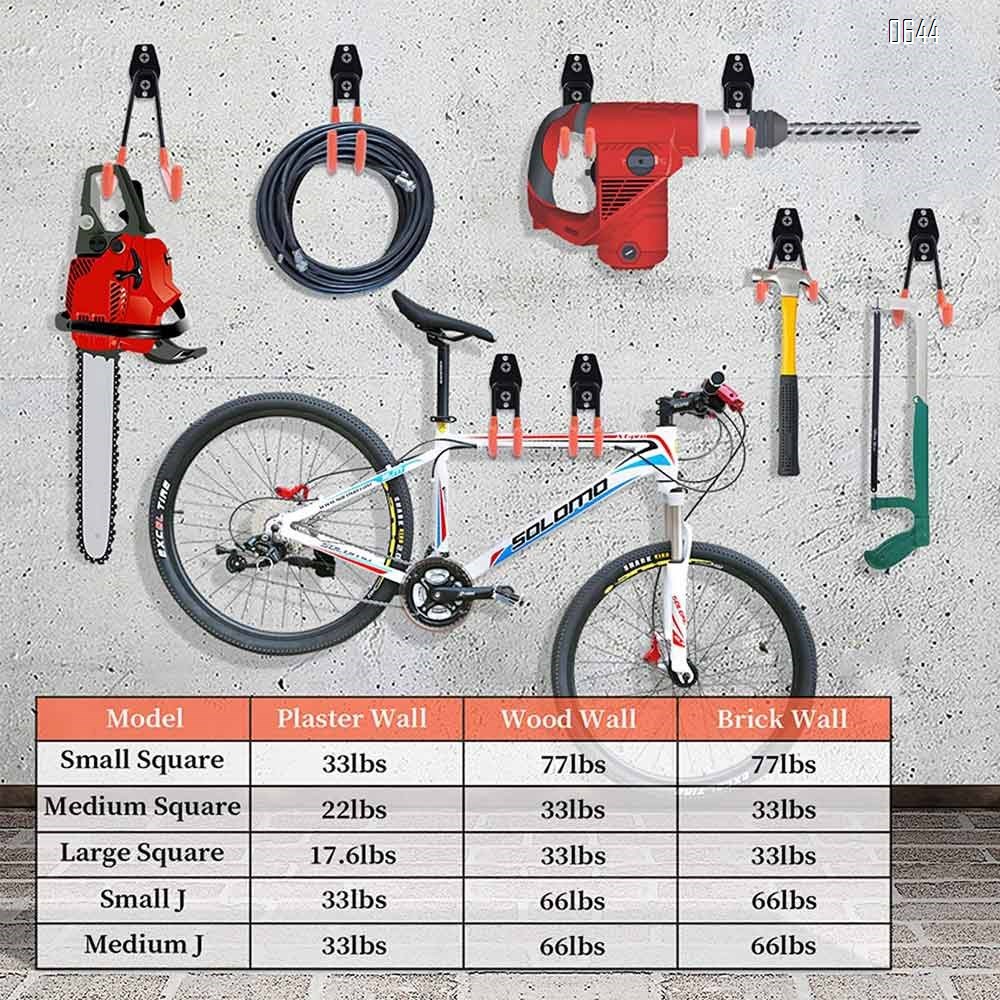 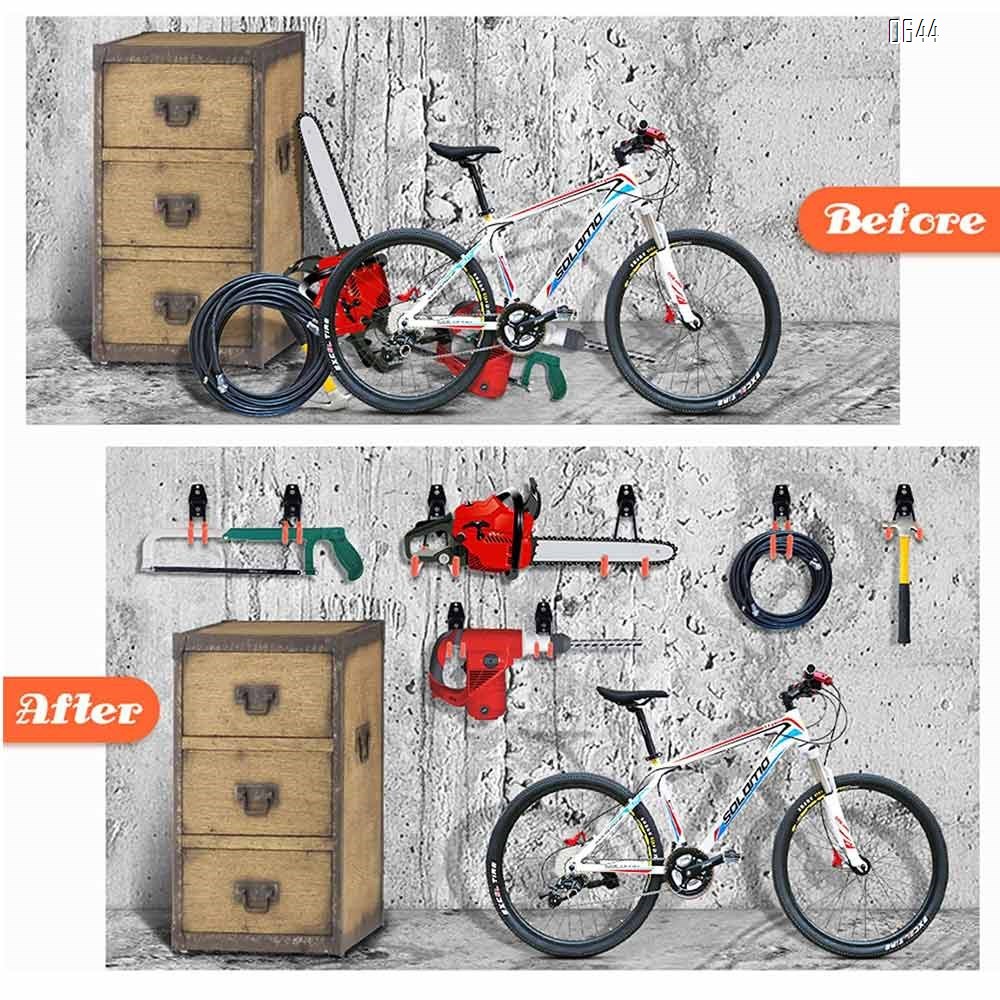 PREMIUM HEAVY DUTY MATERIAL -- Made of high-quality materials and heavy-duty solid iron, have a non-slip PVC coating to ensure your items aren’t scratched by the ladder hooks also prevent rust even in wet weather for long time use. No need to worry fall off anymore. Holds up to 55 pounds or more when properly installed.
EXTENDED HOOKS DESIGN -- Extended length plate design distributes weight evenly for superior holding power. And the notches on plate allow for easy leveling and alignment with other hooks. With 2 loop storage straps, thus some rope can hung on the garage hook, further convenient help in organizing your tools.
EFFORTLESS INSTALLATION-- Comes with 28 sets of screws for however and wherever you plan to install them. The distance between mounted holes is 1.36/2.17 inches. Just need a drill and screwdriver, the garage wall organizer can be easily installed on plaster walls, concrete, brick walls.
WIDELY USED & MULTIFUNCTION USAGE -- Compact sizing and clean design garage organization systems. Suitable for organizing all kinds of tools. Such as shovels, push brooms, bikes, bags, towels, robes, umbrellas, rain boots, etc. A nice choice for storing and holding your tools in home, garage, apartment, utility room, basement or shed.

Alexander GraffOctober 20, 2021
These are amazing. Super strong and easy to use.
Maria arroyoOctober 09, 2021
I meant to write this right after I purchased and installed this. First off, one of the plastic screw anchors would not let me screw all the way through, so I had to remove ot from the wall, damaging the wall and then break it off the screw. I then tried to put it back in the wall without it and continue with installation instructions. Long story short, it always slips and turns and the hook falls! This was a waste of money and it’s an eye sore on my wall now! So disappointing, I really needed a towel hook for my daughters bathroom!
John a.September 28, 2021
Nice hooks
MBSeptember 17, 2021
excellent product. well made. very pleased.
An CustomerSeptember 06, 2021
Hi quality product. Looks so good on the distressed coat rack my husband made that we bought a second box for another coat rack.
RCSAugust 26, 2021
I wanted to hang a 200" sheer scarf over the windows above my patio doors and looked for some kind of hook that would not require nails in my wall. I found these and the reviews looked okay, so I ordered them. I needed four hooks and since I was afraid that the medium weight hooks that came in a 4-pack might not hold, I ordered two packs of the heavy duty that only came in 3-packs. What a waste of money. I followed the directions exactly, even allowing one hour for them to "set" when they advise 30 minutes. I have ten foot ceilings and it's difficult to reach that high so I wanted to be sure they were secure on the first try. I put the scarf up and got it arranged in just a couple of minutes and was pleased with the look. Fifteen minutes later, one of the hooks came down. I got the ladder back out, climbed up, put a new sticker seal on the hook and tried again. When I got up this morning, two more (different) hooks had come down. Out came the ladder again and I re-applied more sticker tape and before I got off the ladder, the last hook and the first one that came down were both on the floor. I gave up and just hammered a small nail into each of the hooks, which I could have done in the first place for a lot less money and a lot less aggravation!! I would not recommend this product to anyone who needs to hang anything. Those commercials that show numerous belts, ties and various articles of clothing being held up by these hooks are nothing but BS. Save your time and money. This scarf weighed less than one pound and four of the large hooks couldn't hold it.
CustomerAugust 15, 2021
Strong, well made.
Doing what I canAugust 04, 2021
I needed something to keep the kids bags handy but off the floor & the command 3M large hook is working swell.

My photo depicts a checker pattern backpack hanging on the command 3M large hook. You can see next to it a different brand and it's teeny tiny little hook. I followed the instructions for the command 3M hook (as well as the other hook).

The command 3M hook is adhering very nicely to the wall. The other hook appears to be peeling yet I'm not sure whether it will peel off or not. I do know that the other brand does not look as friendly two backpacks or coats as the command hook. My kiddo has a couple lbs of books in her bag. The large 3M was the perfect size for our backpacks. Though I wish they weren't so pricey.

I will likely use these hooks for other things
Nancy FolkJuly 24, 2021
Very nice hooks for the price. Would definitely recommend.
STEVE DJuly 13, 2021
Can’t say much, came fast ,look good, have been in use over a month. All good