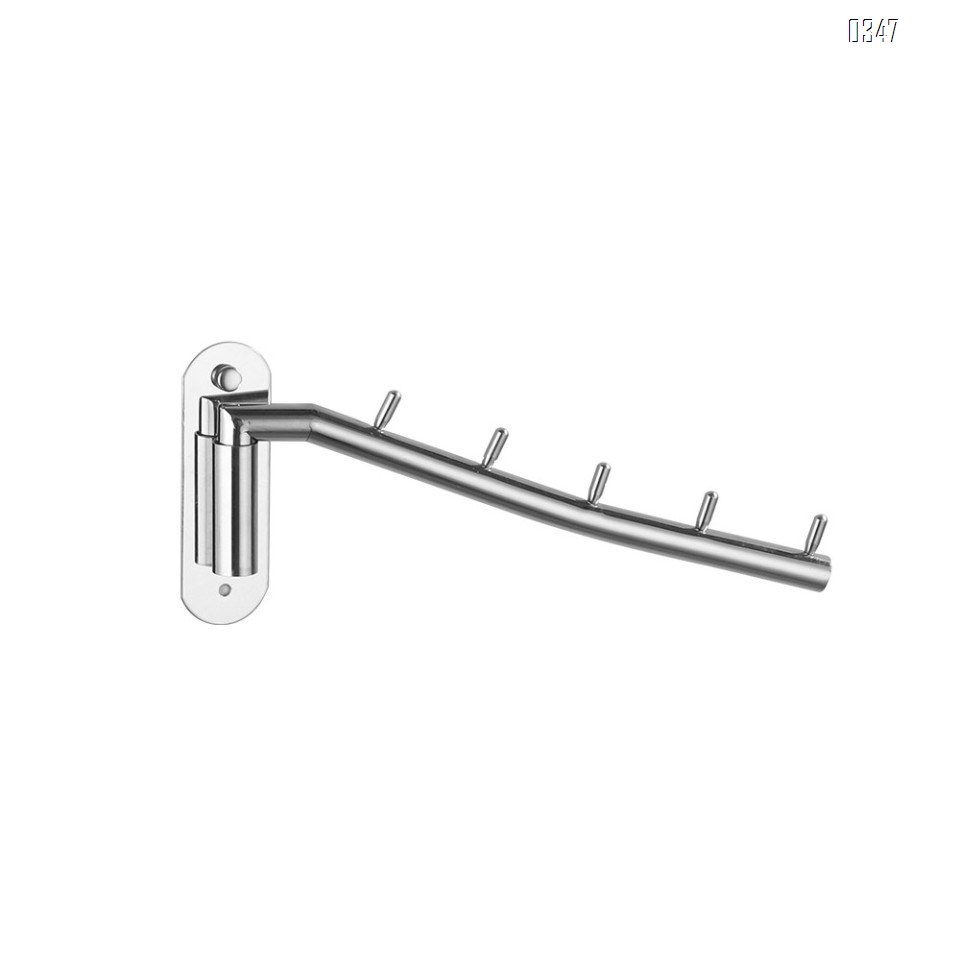 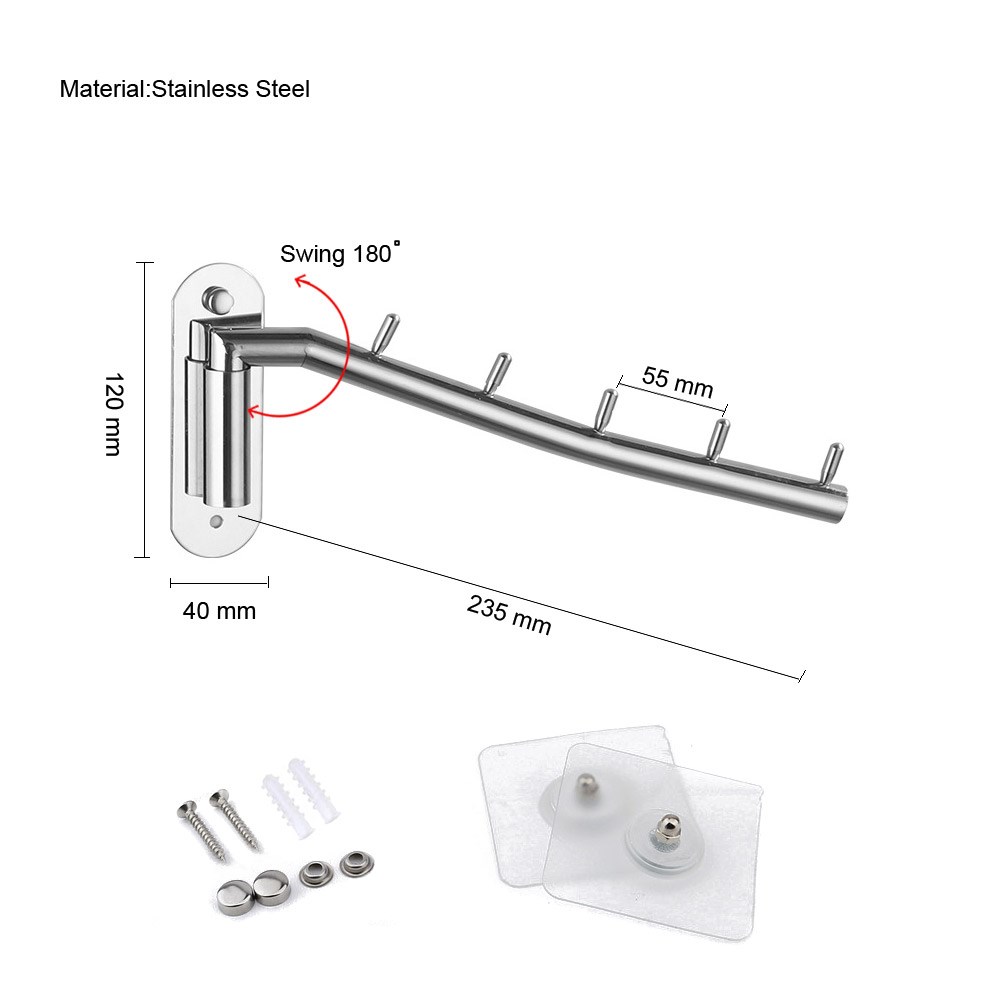 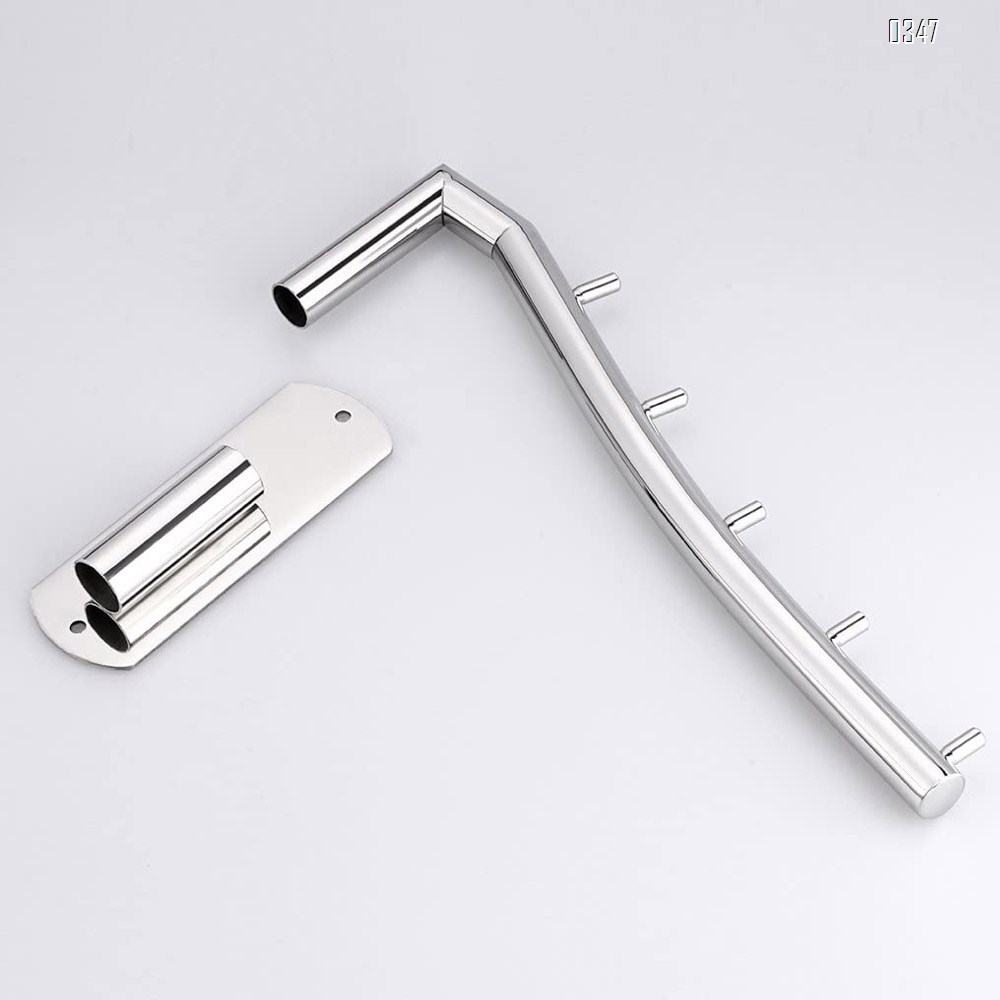 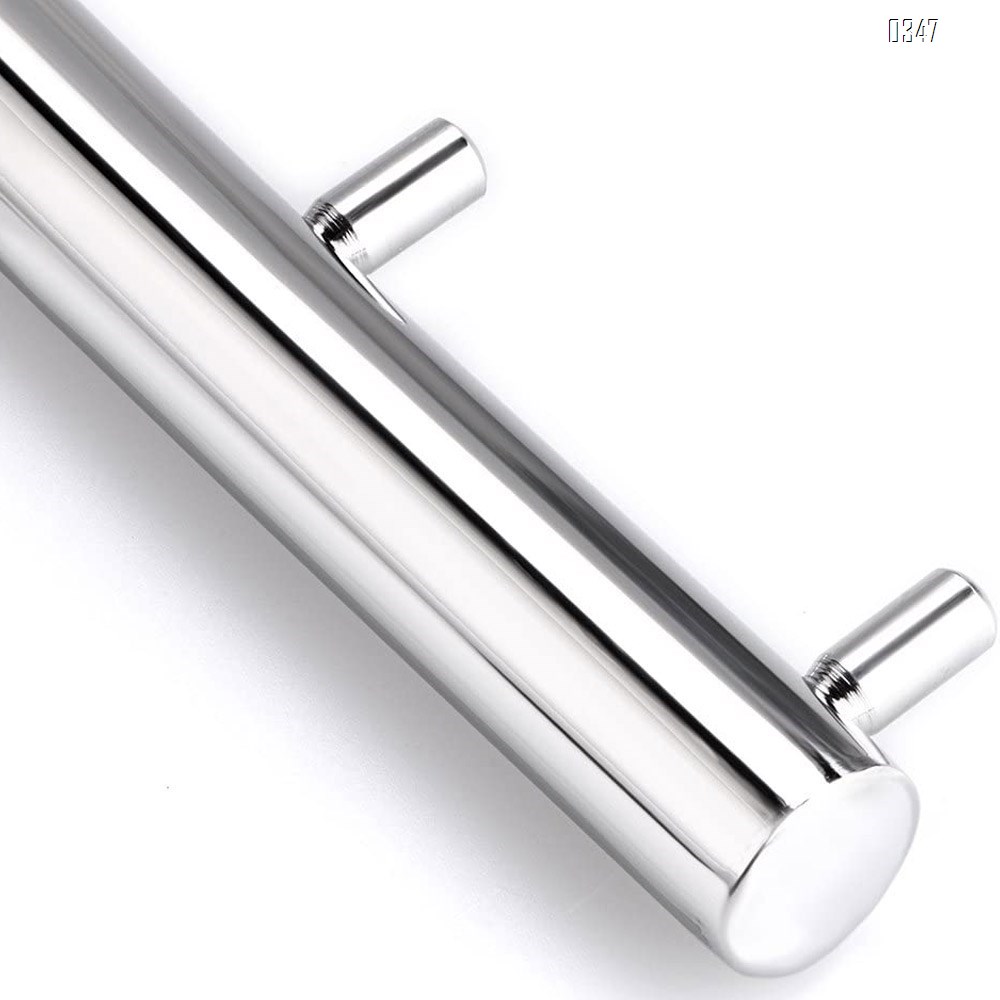 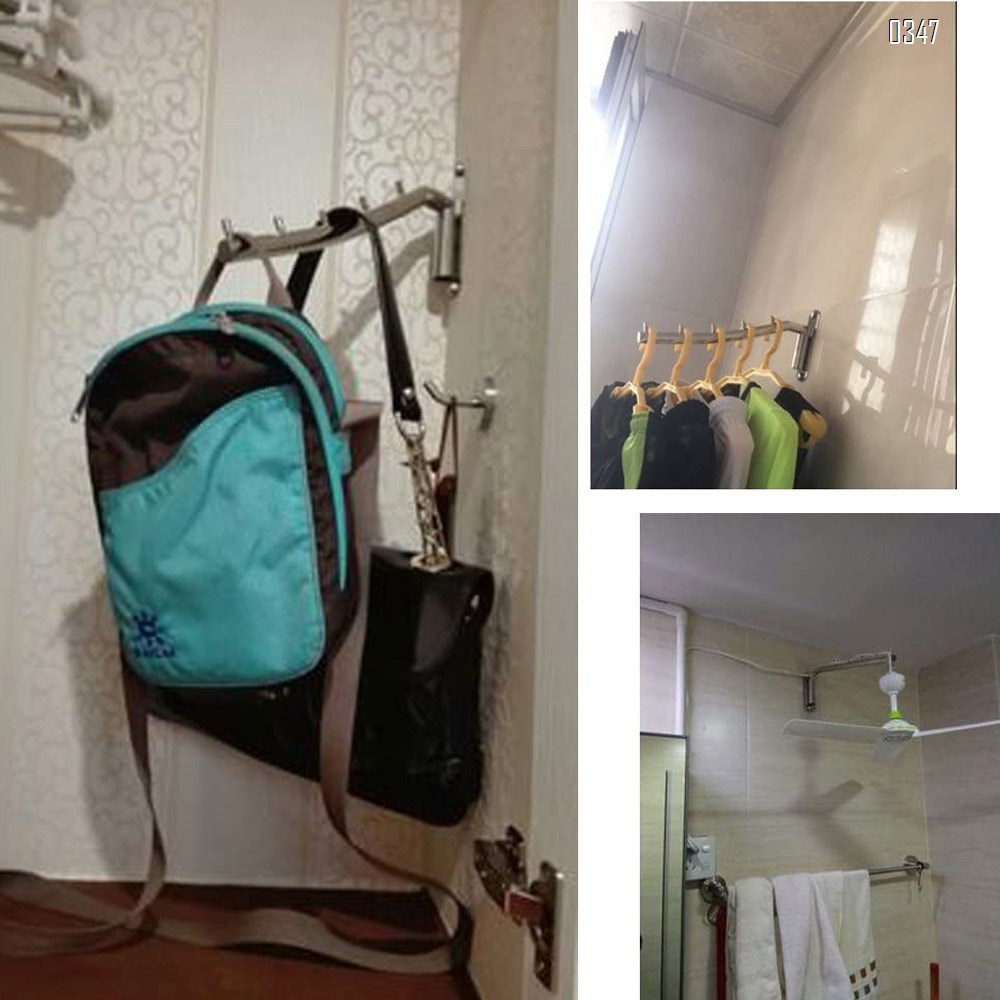 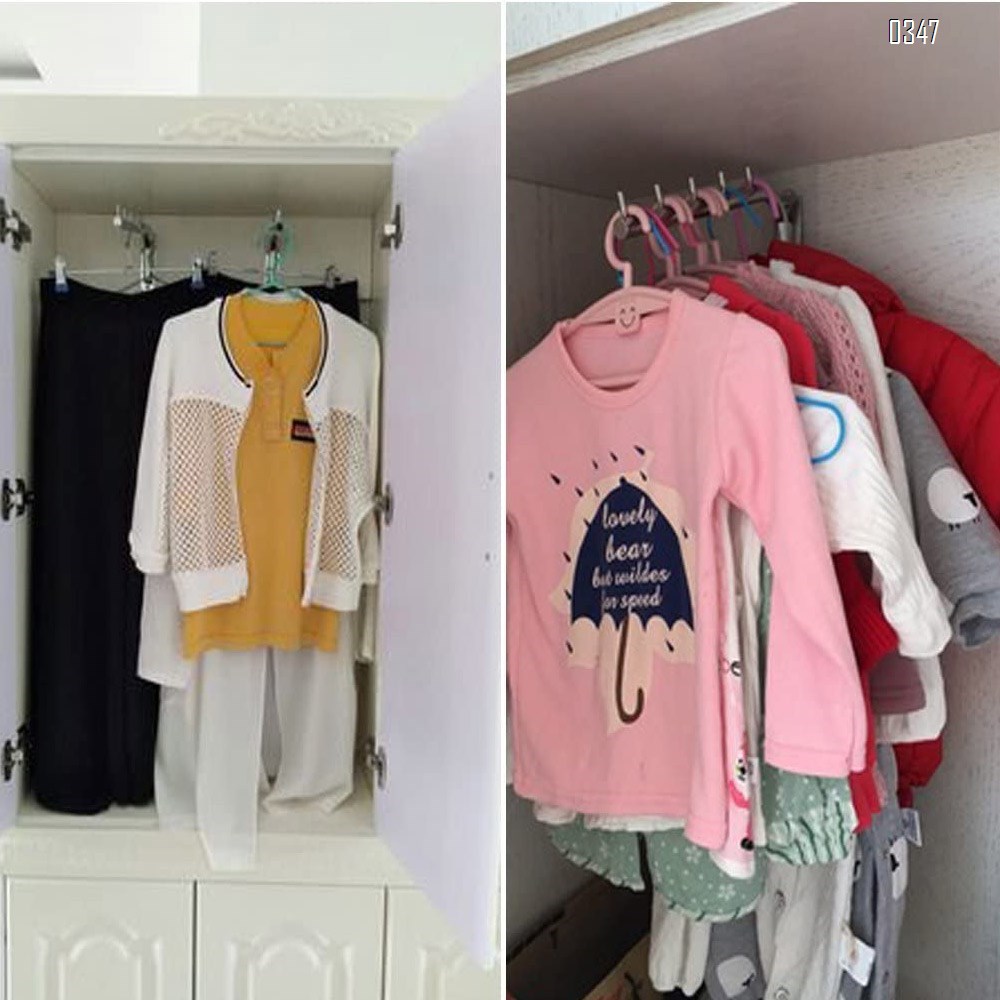 Heavy duty rack! If you are looking for ways to quickly hang clothes that you wear a lot in an easy, accessible, convenient, and nice looking way, this rack you should have. There's room for plenty of hangers, and It's handy to be able to swing the arm against the wall and out of the way when not in use.
SPACE SAVER - This rack is heavy duty.It can swing 180 degrees. Pretty easy to install, mounting screws are include in the package. Very durable and sturdy. Nice space saving design just open, to hang and close it up when done. Gives you an "instant clothes closet" anywhere; perfect for small spaces, out-of-the-way corners, bathrooms, on a porch or deck, and much more.
Handy, Tidy - It's such a simple idea, but keeps hangers off the shower rod. They are that just that handy for anything from hanging shirts to prevent wrinkling if left too long in the dryer, to using as a valet to lay out the clothing. Use your imagination, it not only can hang clothes, also can hang hat, bag,necklaces where they wouldn't get all tangled up and so on.
This is ideal for the space that has in your laundry room or other rooms. It also looks neat and attractive and matches other accessories at home. This colthes hooks is made from premium-grade stainless steel and it is sturdy enough to hold jeans, sweaters and jackets even when wet.
Sturdy, elegant and time saver- It has plenty of room for all the shirts coat and keeps them separated nicely. This allows to hang heavy items (coats, etc.) out of the way in a stacked/cascaded fashion. You can hang one in each of your families closet's, then they use them to hang up the clothes they will wear the next day!

vondJuly 21, 2021
I'm not a distinguished connoisseur of furnishing items and the like, but I can definitely say that I am thoroughly pleased with the build quality and look/appeal of this hook rack. When I opened the box, I was immediately greeted with the scent of semi-fresh wood-stain, which made it very clear that this slab of wood was very recently a mere slab of unshaped wood on a carpenters lathe somewhere, and that they were indeed made by hand. The wood itself was almost perfectly flat, and there were no knots or any unsightly flaws within the wood. Of course, that was BEFORE I nudged it off my counter and dinged a corner during the mounting process *curses*. The ONLY gripe that I made to myself when examining the craftsmanship was that they didn't do their due diligence to do the last few passes over the woods surface with some 600-1000+ grit sand paper to really make the varnish shine. Granted, that's more than likely on the account that they're selling these things for a mere $25, so they're not going to spend extra time making it shiny. Otherwise, I'd be leaving a review for a $45-60 coat rack instead.

INSTALLATION: While packaging was somewhat lacking, the installation hardware that came with it was perfectly suitable (although I would suggest drywall anchors if you can't find that conveniently placed-stud). In the proper hands with the proper tools, you can have it leveled and mounted to your wall in under 10 minutes.

Buy it, mount it, put a bunch of coats and hats on it, then stand there for 5 minutes or so to marvel at their handiwork and yours. That's what I did :)
Plaid PenguinsJuly 02, 2021
I was disappointed to find one of the hooks broken when I got the package. There is no way to email from the product on my order list to explain. The only option is to return for replacement at my expense. It would cost as much to return it as I paid for the coat rack. :-(
LMF111June 13, 2021
I could not be happier with the quality of this piece. It was easy to install and looks great.
Jonathan TomaMay 25, 2021
Exactly as pictured. Really holds everything and super easy to put together.
Carol P.May 06, 2021
The smaller hooks aren't really that functional. But it is sturdy.
W.April 17, 2021
Exactly what I needed. Rugged construction and fits on the door for secure holding
alka joshiMarch 10, 2021
Perfect for my modern closet.
Mike HutchinsonFebruary 19, 2021
Works fine for hanging my cycling clothes in the new garage.
JustinJanuary 31, 2021
Solid Construction & Configurable Setup

This thing aint made from no flimsy materials, and its easily accessible screws on the back allow for an easy change in configuration. I mounted mine vertically so that the screws can all mount into the stud in the wall, as it holds 3 bags and they're heavy.
SonnyRJanuary 12, 2021
Item as described, Built sturdy. Nice item